5 Things to Know Before Signing an Arbitration Agreement 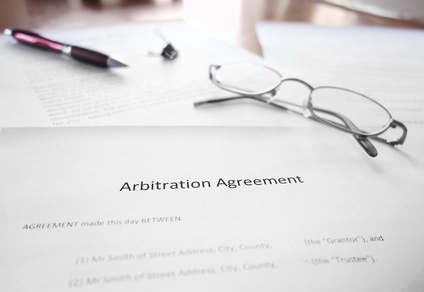 Arbitration has risen from a commonly overlooked paragraph in everyday agreements to the center of a fierce policy debate with wide-ranging implications. While the cases that typically become prominent are those involving employer provisions and workplace culture, an arbitration clause can appear virtually any time an organization exposes itself to potential liability. Your doctor, dentist, credit card company, insurer, and mobile provider are just a few of the many service providers that might include such a clause in their agreements.

Given the ubiquity of arbitration agreements, it is important for consumers to understand their significance and potential downsides.

Arbitration is a form of alternative dispute resolution (ADR) designed to settle a dispute without going to court. The disputing parties each present their respective sides to an arbitrator or panel of arbitrators, who will then issue a final decision. The process is very much like a trial, but more private and often unappealable. The decision is usually binding (with a few potential exceptions).

Many companies will impose forced arbitration in their agreements, meaning the person signing the agreement waives their right to have their claims heard in court if a dispute arises. Instead, they must enter private arbitration agreed to by the company involved.

For example, a doctor might include an arbitration clause in an agreement that a patient must sign in order to undergo a procedure. If something goes wrong during the procedure, the patient might not be able to prosecute a lawsuit in court. This forced arbitration presents a much different situation for the consumer than voluntary arbitration, in which both parties agree to arbitrate after weighing the pros and cons of trial.

Forced arbitration is inherently one-sided. The consumer is waiving their rights, while the corporation receives protection. Furthermore, the corporation gains control over the location, arbitrator(s), and proceedings.

Perhaps most alarming is the fact that corporations generally hire a small number of firms to provide arbitrators who are reluctant to come down hard on major clients. Even a large well-meaning organization can easily amass hundreds or thousands of arbitration cases per year, which creates a conflict of interest for any arbitration company hoping to continue getting business from the company.