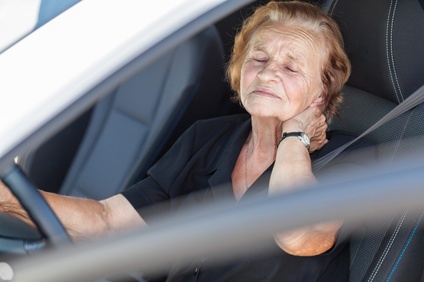 A significant number of California residents and visitors are injured in car accidents each year. In this case, our client was 65 years old and traveling with her family in a minivan when their car was rear-ended by another vehicle. Our client experienced serious pain and discomfort after the accident but the at-fault driver’s insurance company tried to argue that her medical issues were caused by preexisting conditions.

The case was eventually decided by arbitration.

On the day of the accident, our client was a seat-belted passenger in the backseat of a minivan also carrying her son-in-law, daughter, and two grandchildren. The minivan was at a complete stop when they were rear-ended by a car going between 5 to 20 MPH, causing our client’s head to slam into the side window. The fault for the collision was entirely with the other driver.

Damages From the Accident

Damage to the vehicles involved in the accident was minimal. Our client, however, suffered immensely. Immediately after the accident, she began to experience aches and pain all over her body, especially her spine. The pain grew so severe that she made an appointment with her primary care doctor within three days of the incident.

Unfortunately, this visit was not her last, and our client would eventually need to see multiple specialists to treat her injuries, including a neurologist, a chiropractor, and a physical therapist. Scans from an independent radiologist ultimately found multiple spine abnormalities.

The fact that our client was injured was obvious. Belgum, Fry & Van Allen had to fight, however, to prove the extent of the damage.

The opposing insurance company maintained that our client’s injuries were primarily attributable to preexisting conditions rather than the accident. Their argument was based on a workers’ comp claim our client had previously filed where she sustained trauma to her neck, back, shoulders and hips.

However, in the year and a half leading up to the collision, she saw her primary care doctor without complaining of neck or back pain. Those complaints returned after the accident, evidencing causation.

The insurance company fought to undermine the seriousness of our client’s injuries and sought to prove that she only suffered from a simple strain or sprain. The additional harm that she experienced, they argued, was caused by the trauma attributed to her old workers’ comp claim.

It’s possible that the car accident aggravated existing injuries, but that did not absolve the insurance company from paying for her damages. We understood that our client was entitled to reasonable compensation for her suffering, and her compensation should not be discounted because of advanced age or prior health problems.

The insurance company offered to settle, but we knew that the settlement amount was less than our client deserved. When negotiations failed, we took the case to binding arbitration.

Many personal injury attorneys seek easy wins. These attorneys almost always accept settlements rather than risking a loss in trial or arbitration.

That’s where Belgum, Fry & Van Allen is different. We fully commit to our clients and always fight for the best possible outcome. In this case, we felt confident in the arbitration process because we trusted in the strength of our case.

Our instinct was correct. The arbitrator eventually rewarded our client an amount that was more than double the highest settlement offer. If we hadn’t fought for her, she would have ended up with significantly less money.

Car accidents can derail your life. If you were injured in an accident that wasn’t your fault, contact us today for a free case evaluation. We can help secure the funds you need to finance your recovery.