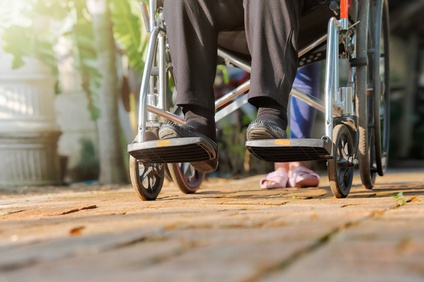 Our client, bound to a wheelchair most of her life due to cerebral palsy and 60-years-old at the time of the incident, had just visited her daughter to drop off a stuffed animal for her granddaughter’s birthday. She was being wheeled down a local sidewalk when she was thrust forward from her wheelchair due to an unexpected uplift from one slab of sidewalk to the next. She would suffer multiple fractures in both of her legs from the incident. Shortly after the incident, the sidewalk was found to have an abrupt vertical lift of 1 5/16 inches.

Shortly after the incident, the defendant City introduced a “Sidewalk Inspection Program” which considered vertical sidewalk displacements exceeding 1 1/4 inch and those in a sensitive location to be most dangerous. The displacement that caused this accident qualified under both standards; the 1 5/16 vertical displacement was confirmed by an engineer, and the location of the displacement occurred near one of the busiest intersections in the City, near two large colleges.

The City contended that the condition had not been reported by anyone and was open or obvious to pedestrians. They also argued that our client’s friend was negligent for pushing her too fast. And while the Sidewalk Inspection Program had not been formally instituted until after our client’s injuries, the City’s Public Works Maintenance Supervisor testified in deposition that the same guidelines were in effect prior. This admission revealed that the displacement should have been discovered and repaired (or marked) under the City’s unofficial program, which a Public Works and City Engineer confessed had been previously outlined by the City’s insurer.

While the City clearly was not in compliance with its own standards and had missed ample opportunity to address the sidewalk, any case involving a dangerous condition on public property is challenging for the plaintiff to win. The defendant simply has to prove that they either did not know of the danger or that the danger was obvious enough for the plaintiff to notice and avoid. With these challenges in mind, the Law Offices of Belgum, Fry & Van Allen prepared the case accordingly.

We uncovered in deposition testimony that a tree bordering the sidewalk caused the displacement, its roots impacting the surrounding soil and pushing the slab upward. The tree was trimmed by a city crew just nine days before our client’s fall; therefore, the City had an opportunity to identify the defect and take action. We also used Google Street View images to prove that the curb had been painted not long before the incident—another missed opportunity to identify the problem and promptly fix it. The evidence overwhelmingly established that the sidewalk was unnecessarily hazardous, that the City had notice and time to take corrective measures, and that the hazard caused our client’s injuries.

The City promptly applied fluorescent paint to the dangerous sidewalk—and subsequently repaired the sidewalk—after receiving the personal injury claim. Meanwhile, our client had a long and painful road to recovery from her injuries.

We were, fortunately, able to secure a hard-fought $700,000 settlement from the City, including compensation for her pain, suffering, and medical expenses. She can now use this money to seek whatever medical care she needs, improve her quality of life, and spend more time with her family.

Have you been injured on public property and believe the owner of the property may have neglected a dangerous condition? Get a free case evaluation today.