What to Expect in Mediation 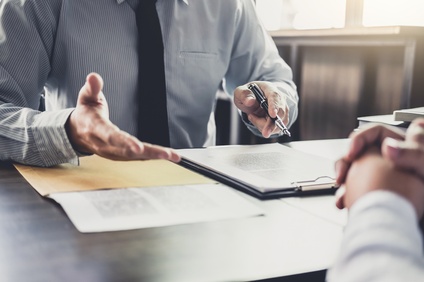 Many personal injury cases go through mediation prior to—and, ideally, in lieu of—trial. Mediation is a form of alternative dispute resolution (ADR) in which disputing parties agree to meet with a mediator in an attempt to resolve the dispute without going to trial.

While a judge can require parties to attend mediation, it is usually voluntary. This is advantageous because it means both sides have at least some inclination to reach a settlement.

A mediator is a neutral third party whose job it is to help guide parties toward a resolution. Most mediators do this by speaking with both sides separately, facilitating negotiation and encouraging a compromise. Most personal injury mediations occur in a mediator’s office, with separate conference rooms where the parties remain throughout the session. The parties generally do not interact with each other directly, with the possible exception of a brief introduction or clarification of specific facts. At the end of mediation, the parties may agree to sign a settlement and release agreement. If a settlement is not reached, the mediator will usually offer other recommendations for resolving the dispute short of trial.

Mediation most often occurs after a lawsuit has been filed. In rare cases, it may take place beforehand. Disputing parties will often look to schedule mediation at least two months prior to a trial date before they begin to spend additional money preparing for trial. There is more incentive for both sides to settle in mediation early on, as doing so avoids the need for experts, non-party witnesses, jury fees, court reporters and the many other expenses that make trial so costly.

The primary benefit of mediation is that it typically costs much less than trial. Retired judges or pro bono mediators will sometimes volunteer their time, though most will charge a fee. The cost for mediation can range from $1,200 to $5,000.00 for a half-day session, with the parties typically splitting this fee evenly. However, when compared to $25,000.00 or more plus additional attorney fees for a simple, week-long trial, mediation is undoubtedly the more cost-effective option. For this reason, a case that settles for less in mediation often puts more money in the plaintiff’s pocket than would a larger award from a trial verdict.

Prior to mediation, the attorneys can exchange briefs with both the mediator and the opposing side. Often, the defense attorney chooses to serve a confidential mediation brief, which is shared with the mediator but not the plaintiff’s attorney. A plaintiff will almost always share their brief with the defendant as they attempt to provide all the information necessary to encourage the defendant to settle.

By law (with few exceptions), anything said in mediation—along with any settlement offered—is confidential. This means that statements made and settlement offers exchanged during the mediation process cannot be brought in as evidence at trial. For example, a personal injury attorney in trial cannot claim that the defendant knows they are in the wrong because they offered to settle in mediation. Similarly, the defense attorney cannot use something that the plaintiff claimed in mediation against them at trial. The reason for mediation being confidential is to encourage both sides to speak freely so that the case has a greater chance of being resolved.

Mediation is driven by negotiation. The plaintiff will usually make a demand higher than what they expect to settle for, while the defendant will typically present a lowball initial offer. The goal, of course, is for the two sides to inch toward a compromise.

Keep in mind that mediation is not like a court setting; there are no witnesses and the parties are not under oath. It’s also important to understand that a mediator is there to bring both parties closer to a resolution, so they may give both sides a negative spin on their respective standing in order to bridge the gap. A good mediator keeps the conversation going between both parties by getting the plaintiff to lower their demand and the defendant to increase their offer until an agreement is finally reached.

If negotiation is not effective, the mediator may propose a bracket. For example, they might ask the defendant if they would increase their offer to $100,000.00 if the plaintiff were to reduce their demand to $300,000.00. This can help to bridge large gaps between negotiating parties.

If the case is not settled in mediation, the mediator will sometimes make a last attempt at a compromise by sending a proposal for settlement to both sides separately (usually through email). Each party responds to the mediator’s proposal by a given deadline, and if both parties accept, the case settles for the given amount. If either party declines, the parties do not get to see whether the other accepted or declined. The mediator’s proposal is designed to allow both sides to let down their guard without giving up negotiating leverage.

Mediation for a Personal Injury Settlement

If you have been injured and believe another party is at fault, contact the Law Offices of Belgum, Fry & Van Allen for a free case evaluation to determine whether mediation might be a viable solution for you to receive the compensation you deserve.